"Angels can fly because they take themselves lightly." – G. K. Chesterton

One advantage to my slow posting is that often a story has completely run its course by the time I get around to commenting on it. Last month a tiny fragment of an ancient Coptic manuscript showed up that included a reference to “the wife of Jesus”. The manupscript supposedly dated from the third century A.D., which would obviously make it useless as far as real, historical evidence was concerned. That didn’t stop the mainstream media from going into a tizzy, playing up the the supposed “fact” that Jesus had a wife and discussing how this new revelation would rock the foundations of Christianity. 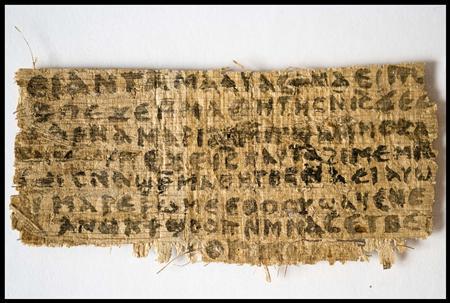 Within a few days, more sober-minded scholars had taken a look at the fragment. It was a fraud. Some forger had copied a few lines from the Gospel of Thomas and inserted the phrase “the wife of Jesus” in the middle. There were also errors in grammar and continuity. Here’s an article that tells the whole story.

Of course this sort of hoax is not new to those who study the Bible and archaeology. Less than two years ago, we were treated to the case of the lead codices from Jordan.  Before that there was the “Jesus family tomb”, the supposed ossuary of James, Secret Mark, and many others.  Plainly anyone should be on their guard against fakes, and a supposedly major find relating to the life of Jesus should always be treated with skepticism.  Thre question then becomes: why don’t the media and the liberal scholars do that?  After all, we’re told time after time that the non-religious and mildly religious are much more skeptical than the truly religious.  We’re informed over and over again that true believers fall for all kinds of bunkum, while the other group does not.  Why, then, is it the media and the secular academic complex that got suckered by this fragment?  Why indeed?