"Angels can fly because they take themselves lightly." – G. K. Chesterton

Perhaps you have heard of trigger warnings, the new fads that’s swept parts of the internet over the past couple years and is no emerging into real life.  The idea is that there are certain topics which may provoke, or “trigger”, a particularly strong reaction among certain readers.  In some locales it’s become customary to place a trigger warning at the top of an article if it deals with something such as sexual violence, eating disorders, racism, or so forth.  Not surprisingly, colleges and universities are among the places where this type of thinking spread next.  Schools such as UC Stanta Barbara and Oberlin have announced policies requiring professors to offer warnings when a text may be “triggering”.

As one who is always will to assist in the promotion of great literature and education, I’ve decided to write the trigger warnings for some well-known reads: 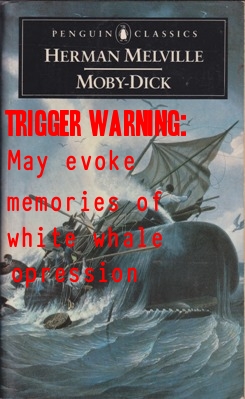 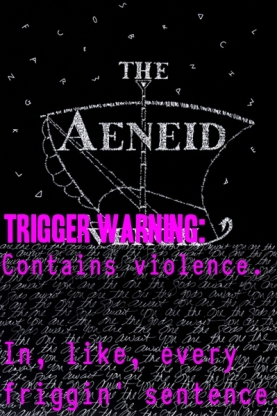 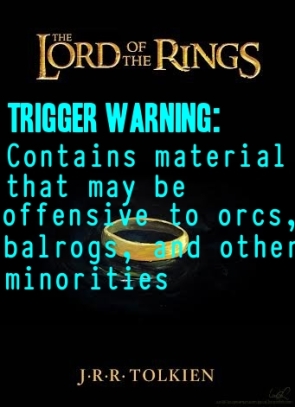 I just encountered this little poem for the first time today.

Ballad of the Sun

O well for him that loves the sun
That sees the heaven-race ridden or run,
The splashing seas of sunset won,
And shouts for victory.

God made the sun to crown his head,
And when death’s dart at last is sped,
At least it will not find him dead,
And pass the carrion by.

Not less for us and everyone
Was that white web of splendor spun;
O well for him who loves the sun
Although the sun should slay.

Short and sweet and very meaningful, as Chesterton’s poems always are.  (Well they’re not always short, but they’re always good.)  Chesteron was a lover of nature.  At the same time, he was careful to divide that from worship of nature.  Nature has great beauty and provides many good things for us.  This is because God created nature in order to allow us life and enjoyment, and God has mercy and goodness.  But nature itself does not have moral properties such as mercy and goodness.  In fact, much in nature can be lethal.

Here Chesterton illustrates this with the example of the sun.  The first two verses celebrates what’s good about the sun.  Verse three points out that the sun is not a deity, as many of the ancients would have it.  Praying to the sun, or expecting it to care about any person or thing, is pointless.  Verse four ties it all together.

Bitten by a turtle lately?

Have you been crushed by a crocodile lately?  Well don’t worry–your doctor has a code for that.  Injured by an exploding non-powered glider?  There’s a code for that too.  Pecked by a turkey?  It’s covered.

Yes, the federal government is requiring that all doctors, hospitals, and health care providers use codes from the newly issued DCM-10 when reporting injuries and illnesses.  So when you tell your doctor that you were pecked by a turkey, they’ll enter put the code W61.43XA on all forms related to insurance claims, medical reports and so forth.  Assuming that this is the first time your report it, that is.  For subsequent turkey-pecking injuries, the code is W61.43XD, so don’t get confused.  Likewise, W58.13XA would be code for your first instance of being crushed by a crocodile, not to be confused with W58.03XA, which is “crushed by alligator, initial encounter”.  And “Glider (nonpowered) explosion injuring occupant” is code V96.25XA, while while V96.15XA is “Hang-glider explosion injuring occupant.”

The codes don’t apply exclusively to the type of injuries.  Doctors must also report the location of the injury.  So if you’re injured in a chicken coop, your doctor will need code Y92.72, while Y92.311 indicates that you were injured on a squash court.  Y92.152 informs us that you got hurt in the bathroom of a reform school, which is distinct from the bathroom of an orphanage (that would be Y92.111).  If you strain your vocal cords at the opera house, that would be Y92.253, while if the aforementioned crocodile crush occurred at the zoo, then it’s time to break out code Y92.834.

All kidding aside, this is serious business.  The total cost of implementing the new reporting system will be in the tens of thousands of dollars for all medical practices, and in the millions for some.  83 large organizations representing most of America’s doctors recently sent a letter to the government, requesting that the DCM-10 be canceled.  The government ignored it, naturally.  And the name of the federal rule which requires doctors to use this system?  “Administrative simplification“.

This morning I clicked on over to the Atlantic Monthly’s homepage and what did I find but an article about the history of big blocks of cheese in the White House.  It turns out that two Presidents have been the recipients of enormous cheeses.  Thomas Jefferson received a wheel of cheddar from a Baptist preacher in 1802; it weighed 1,234 pounds and was engraved with the motto “Rebellion to tyrants is obedience to God.”  (If better words were ever put on cheese, I’m unaware of it.)  A generation later, a dairy farmer named Thomas Meachem offered Andrew Jackson an even bigger cheddar: 1,400 pounds.  It left the White House stinking of cheese until the Van Buren Administration.

After a few sentences exchanged at long intervals in the manner of rustic courtesy, I inquired casually what was the name of the town. The old lady answered that its name was Stilton, and composedly continued her needlework. But I had paused with my mug in air, and was gazing at her with a suddenly arrested concern. “I suppose,” I said, “that it has nothing to do with the cheese of that name.” “Oh, yes,” she answered, with a staggering indifference, “they used to make it here.”

I put down my mug with a gravity far greater than her own. “But this place is a Shrine!” I said. “Pilgrims should be pouring into it from wherever the English legend has endured alive. There ought to be a colossal statue in the market-place of the man who invented Stilton cheese. There ought to be another colossal statue of the first cow who provided the foundations of it. There should be a burnished tablet let into the ground on the spot where some courageous man first ate Stilton cheese, and survived. On the top of a neighbouring hill (if there are any neighbouring hills) there should be a huge model of a Stilton cheese, made of some rich green marble and engraven with some haughty motto: I suggest something like ‘Ver non semper viret; sed Stiltonia semper virescit.'” The old lady said, “Yes, sir,” and continued her domestic occupations.

After a strained and emotional silence, I said, “If I take a meal here tonight can you give me any Stilton?”

“No, sir; I’m afraid we haven’t got any Stilton,” said the immovable one, speaking as if it were something thousands of miles away.

“This is awful,” I said: for it seemed to me a strange allegory of England as she is now; this little town that had lost its glory; and forgotten, so to speak, the meaning of its own name. And I thought it yet more symbolic because from all that old and full and virile life, the great cheese was gone; and only the beer remained. And even that will be stolen by the Liberals or adulterated by the Conservatives. Politely disengaging myself, I made my way as quickly as possible to the nearest large, noisy, and nasty town in that neighbourhood, where I sought out the nearest vulgar, tawdry, and avaricious restaurant.

There (after trifling with beef, mutton, puddings, pies, and so on) I got a Stilton cheese.

The Oscars and Pretentious Nonsense

Yet it’s fairly obvious that many people do care about movies, including adults of at least moderate intelligence.  Today the nominations for the Academy Awards were announced, and big headlines arrived declaring the fact at virtually every publication in the country.  Apparently the movies with the most nominees are Birdman and The Grand Budapest Hotel.  I don’t know when the Academy Awards actually will take place, but I do know that they will be a typical celebration of hubris and empty nonsense.  Vast amounts of money will be spent on preparations.  Vast amounts of talking will focus on how women at the ceremony are dressed, and somewhat smaller amounts will focus on the movies and the awards.  Most paid commentators will be content to pour out streams of utterly predictable pablum, which could probably be produced by a computer at much lower cost.  Others will bend over backwards to put their own personal spin on why the Oscars matter a lot.

Now some people might have thought that the Academy gives out nominations based on artistic merit, rather than the importance of the stories.  Indeed, some might think that that’s the whole point of the spiel.  Mr. Kois obviously doesn’t think so.  To him, it goes without saying that if the Academy doesn’t give his preferred movie a best picture nomination, it must be because of sexism.

This sort of thing has happened before.  In 2006, for instance, Brokeback Mountain was nominated for Best Picture but narrowly lost out to Crash.  Brokeback was about gay cowboys, while the main selling point for Crash was that it contained the word “f*ck” 99 times.  Many people believed that Brokeback was the favorite going into the ceremony.  When Crash crashed the party, some proclaimed directly that only homophobia could explain why anyone would fail to vote for Brokeback.  Roger Ebert wrote this excellent article on the topic.

Such explosions of hatred are perfect demonstrations of how many in the liberal media think.  The claims are flatly untrue; there is no reason to believe that anyone voted against Wild because of sexism or Brokeback because of homophobia.  They are nasty, imputing bad motives to people who have done nothing wrong.  They are narcissistic, assuming that just because the writer views everything through a lens of gender and sex, everything else must do.  They toss out any consideration of artistic merit.  They are, in short, Hollywood at its most normal.